Hosting providers offering homeservers of any size can make use of this project to lower costs associated with hosting media, and to manage/report usage of the media repository.

For single region or single datacenter structures, the "Multiple Servers" environment will be a better fit.

For more complicated structures, such as multi-region or size differences in the offering, the following infrastructure diagram might apply: 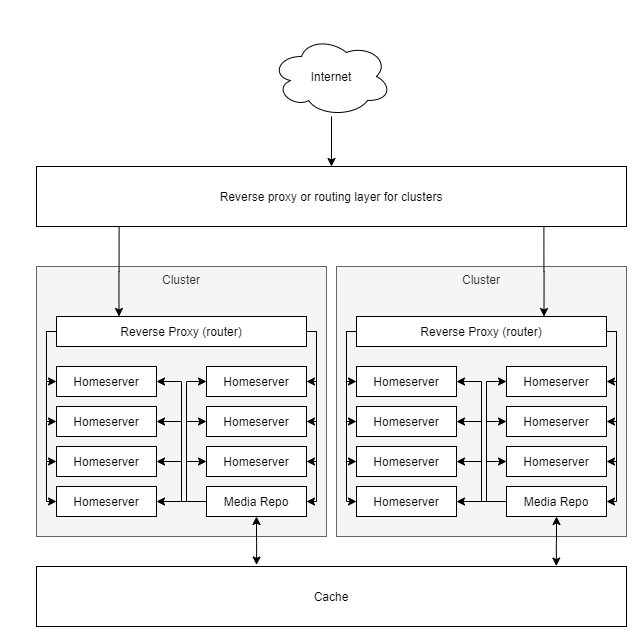 Each cluser is essentially a "Multiple Servers" style deployment with a shared cache layer across the entire DC or region. This cache layer can be used by the media repo instances to more easily share media across clusters within the DC/region. The media repos might still duplicate media between themselves, however this is generally better than trying to set up a single media repo for thousands of servers.

In general it is recommended to keep the number of servers associated with a single media repo to less than 250. Keeping the number below 100 is even more ideal due to traffic considerations.

Generally it is expected that hosting providers will use Docker as an installation method. CPU requirements are generally low (1-2 cores for a few dozen hosts), however disk space and memory can be significant.

When not using Redis, see the configuration section of this documentation for estimating memory usage.

Disk space is strongly recommended to be managed with S3 or an S3-like service. Mounting a volume is possible, though usually cluster deployments prefer to have zero ties to physical disks.